It’s been a very good year. I think, on the whole, it falls more into the joy category than the grief.

There has been some struggle, most of it financial. But I keep reminding myself that I have a roof over my head. I have friends who have helped in bad times. I have a working vehicle. I’m not hungry. I can still rustle up money to donate to my two favorite charities. Life isn’t hard.

There has been some grief, most of it around our aging dog who still has more good days than bad. We feel we’re always on the edge, waiting for that tipping moment. And we have days of tears. But we also have days of love and laughter, long walks, playing with stuffed toys, cuddling.

I became a legal permanent resident of Canada this year. The process wasn’t as hard as I expected, but we were privileged to be able to pay a lawyer to help with the paperwork. (And there was A LOT) The lawyer kept coming back with things we’d missed, more information they needed, more proof of the validity of mine and Joy’s relationship. Finally, when he came back with yet another request for proof, I sent him fifty pages of our Google Hangouts chats going back to the beginning of our relationship. I told him I couldn’t be held accountable for things he might see. I did notice that there were many redacted spots in the final submission, perhaps he deleted all the boob pics we sent to each other. Though we spent about a year gathering documents, once we submitted the final package, the official acceptance didn’t take long. We submitted the whole package in September of 2018 and I became a Canadian in March of 2019. 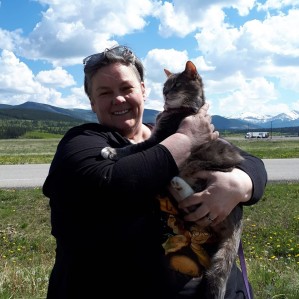 In May, my wife and I moved to British Columbia from Ontario. This involved packing most of what we owned into a POD, shoving the rest of it into our sprinter van and driving across Canada with our sixty pound dog and our cat, Gordo. It was the best road trip of my life. Five days in a van with my wife and not a harsh word, no moments of regret.

boring – after leaving Ontario and until we got to Calgary things were pretty flat.) The boys were absolute troopers. Gordo didn’t want to be in his carrier, so we let him sleep on Brutie’s bed and they were amazing. At rest areas, one of us would take the dog out while the other stayed with the cat. We took turns going into gas stations for bathroom breaks so the boys wouldn’t be alone in the van. At night, we stayed in a series of pet friendly hotels

It was an incredible way to get to know my new home. Driving across the country with my family gave me a sense of homecoming. It also gave me a sense of the vastness of Canada – so many unpopulated areas still. In Banff, I saw my first bear. At Lake Louise, we hiked out to see the lake in our hoodies and tennis shoes because it was warm at the lower elevations. And it made my marriage even stronger – I’ve never spent so much concentrated time with someone who was always kind, always interested in what I had to say. When we pulled into Princeton for the first time, the whole family was a unit – we were coming home together and it felt amazing.

In July, I had to miss a writer’s conference that I haven’t missed in years. The Golden Crown Literary Society is the best (IMO) LGBTQ writer’s and reader’s conference of all time. It hurt my heart to have to miss it, but I was dealing with a health problem and long hours of flying from here to Pittsburgh, PA didn’t seem like a good idea. I’d be lying if I said I didn’t shed some tears during the week of the conference, especially when the pictures started getting posted on Facebook.

Joy and I spent the summer, the fall, and most of the winter exploring the outdoors in

our new home. We walked a lot, biked a lot, climbed a lot of hills. We crossed some rivers, found some dead ends, saw a lot of deer, a couple bears, and a Mama moose and her baby. (We didn’t see a cougar, but there were several sightings in our area by some of our neighbors.) We got a pet stroller and took Gordo with us on several hikes. 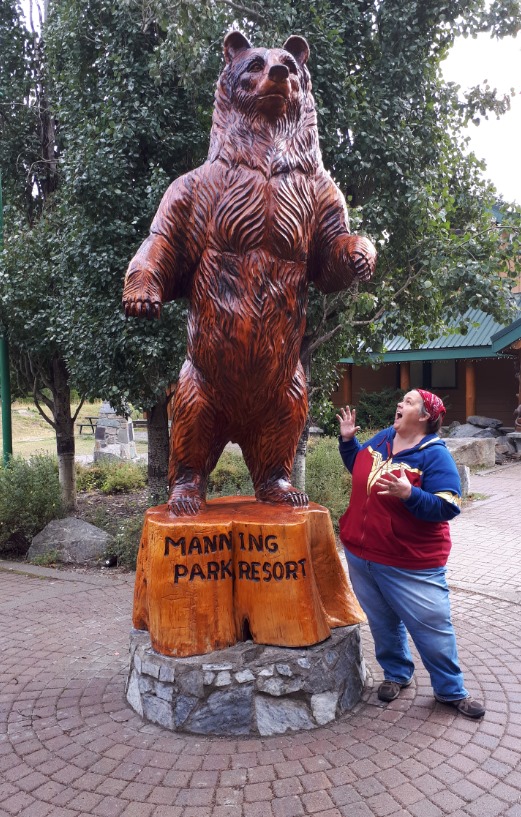 We got to know our new home. We acted like tourists – tourists who get to come back to our own comfortable home and our own comfortable bed at the end of the day of exploring. We didn’t do everything we wanted to do before the snowfall, but we did a lot. And we made notes of things we intend to do next year as soon as the weather starts clearing up and we can get out on the bikes again.

I got to know Joy’s parents – delightful, kind people who instantly accepted me as if I have been part of the family forever. They were a big reason we decided to move to BC. That and the fact that once we realized it would be far easier for me to immigrate to Canada than Joy to immigrate to the U.S., we needed to find a place we liked better than where we were in Ontario. And we wanted to buy a house, something we couldn’t afford where we were living before.

No regrets, y’all. 2019 has been a year of big changes. Huge changes. And here at the end, I can honestly say I have no regrets. My only New Year’s resolution is to be able to same the same at this time next year.

7 thoughts on “Year in Review”