Many years ago, a character popped into my mind and never left. He was a loner—obese, disfigured, quiet and full of self-doubt—but he had an inner well of strength that he almost knew was there. His name was Coyote Jones and for years, maybe even a decade, I tried to put him into various situations because I knew he belonged in a book.

Nothing worked and I decided to put it away. Sometimes, a great character just doesn’t have a story and that’s the end of it.

Fast forward to November of 2017. I’ve gone through the excellent MA in Creative Writing program at Southern New Hampshire University, I’ve had five of my books published by a wonderful small press called Sapphire Books Publishing. I had just finished a book and wasn’t ready to start the next. But someone asked me if I wanted to do NaNoWriMo and I said, why not?

I didn’t make a plan. I didn’t outline. I didn’t do the storyboards and character sketches that I normally do. I just sat down on November 1, 2017 and started writing. Coyote came alive and by the end of the month, I had a rough draft of Coyote Ate the Stars. I set it aside and came back to do revisions a couple months later. I still loved it just as much. It made my heart happy to bring Coyote to life because I loved him so much and I wanted him to have a place in the world.

I decided to self-publish the book, so I hired an amazing editor and released it. It didn’t sell well, not because of the editing or the quality of the books, but simply because  I never had a marketing plan or did much in the way of promotion. I wasn’t part of any groups on Facebook, I didn’t know how to ask for reviews. I never sent it to any review sites. I didn’t put out any press releases. And I had published it under a pen name so even my regular readers didn’t really know I had a new book out.

Self-publishing is hard and I hadn’t realized how much Sapphire did as far as promoting my books until I was doing it myself and found out I had NO IDEA what to do.

Coyote ended up kind of languishing for a while until my wife insisted I submit him to the Writer’s Digest Self-Published Ebook awards. I didn’t want to—I know they get thousands of submissions every year and I didn’t want to put myself out there. But she insisted and I submitted.

Fast forward again to a few days before Christmas when I got an email from Writer’s Digest telling me I had won first place in the fantasy category. First place. My heart still skips a little bit when I think about it. 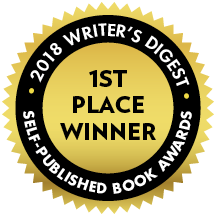 First place. Me. One of my books. Coyote. This is the biggest writing accolade I have ever received and the fact that it was given to a character I believed in for so many years makes it all the sweeter. I’m so grateful that my wife insisted I submit it. And I’m even more grateful to the judges at Writer’s Digest who saw the same beauty in Coyote that I did from the beginning.

I guess it’s another reminder about putting yourself out there. I’m now teaching for the online MFA program at SNHU and I am constantly telling my students that they have to get their work out there. Submit to contest, submit to anthologies, send out queries. I talk to them about the perils of impostor syndrome and the importance of working through fear and self-doubt. And here I am with another lesson of the importance of acting in spite of the fear; it is really the only way to conquer it.

I hope you’ll consider giving Coyote a read. It’s a fantasy book, but don’t let that stop you if you aren’t into that genre. As one reviewer said, “It’s a book about ugliness. The ugliness we see in others, the ugliness we feel in the world, the ugliness we believe about ourselves. But the story is just beautiful. It’s part myth, part fantasy, part family drama. The story drew me in from the first page, with characters who broke my heart with their pain and their earnest desire to fit in. You don’t have to be a fantasy fan in order to enjoy this story. There are far-off lands and strange creatures. But at its core, this story is an inward journey of a young man who carries the weight of the world.”

You can find it online at Bookshop.

Or go into your local bookstore and ask them to order it.

You can also find it in ebook and paper on Amazon.