I’ve recently been thinking a lot about cooperation and connection. I’ve long been a proponent of cooperation in the lesfic community. I often share book links and blogs for other lesbian writers. I believe that the only way we can thrive as a community is for us all to help each other, rather than taking a me and mine attitude. I support women and I try to surround myself with women who support me.

With that in mind, it’s been fun lately to spread that spirit of connection and cooperation beyond the lesfic community. When my friend Elizabeth Anderson insisted I go to the Saints and Sinners Literary Festival, I was blessed to meet some incredible male authors. I have a reading event with one of them next weekend. 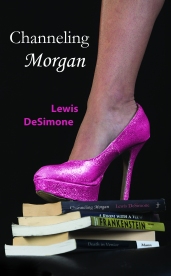 And today, I’m featuring the blog of the bitingly brilliant, sarcastically witty, charmingly sexy Lewis DeSimone. His book, Channeling Morgan, can be found here.  (My wife sat on the couch and chortled while reading this book.)

So sit back, relax, and enjoy the musings of Lewis DeSimone:

A Nightstand I Never Expected to Be On

Novelists are like parents: once you send your baby out into the world, you never know where it’s going to end up.

A lesbian couple I knew kept a copy of my first novel, Chemistry, in their guest room, with a bookmark stuck in the middle of the hottest sex scene. They claimed that their guests—mostly other lesbians—loved it. I’ve heard that straight women are often into gay romance, and even gay porn—as a means, I suppose, of enjoying male sexuality without the danger and complications that often come with straight men.

But lesbians? I wondered. Why would they want to read about sex between men? One of my first lesbian friends told me that lesbians have hot sex for one night and herbal tea for nine years. With numbers like that, why on earth would they want to waste an ounce of sexual energy on men?

Before the knives come out, this is all tongue in cheek (so to speak). I long ago learned that lesbian bed death is a myth. A couple of episodes of The L Word were enough to shatter that stereotype.

On the other hand, I won’t deny that Chemistry plays right into stereotypes of my own community. To put it bluntly, my first novel is riddled with sex. But that’s kind of the point. It’s the story of a sexual awakening, focused on a character who heals a broken heart by opening himself up sexually. Sex is one of the ways he discovers who he is, so I wasn’t about to be coy with it and end scenes with a description of waves crashing to shore. Instead, I freely showed bodies crashing into each other.

You could say I’ve matured. Or that my testosterone level—even in fiction—isn’t quite what it used to be.

But maybe it’s just that some books need sex and others don’t.

Sex is messy and confusing and, above all, unpredictable. I googled this question, don’t you worry. But, like a lot sex, none of the hypotheses I found was fully satisfying. There is no unifying theory of everything when it comes to sexuality. Maybe, when it comes right down to it, sex is sex. And, just as you can’t really predict who you’re going to be attracted to, you can’t always be sure which depictions of sex will turn you on, either. That’s why there are so many subgenres of porn: one gay site I know of has dozens of categories, from “Amateurs” to “Voyeur.”

So who knows why a lesbian would get turned on my book? Who knows why I got turned on by seeing Blue Is the Warmest Color? Who knows why I love asparagus but hate artichokes? (I mean that literally, by the way. It wasn’t until I’d already typed out the sentence that I realized the sexual imagery. See what I mean? Sex is everywhere and nowhere at once.)

And that woman with the herbal tea? I met her at an AIDS service organization in Boston in the late 1980s. When I was just coming out, into a community with two kinds of people: the dying and the terrified. And lesbians, with only minimal threat from the epidemic, were at the forefront in fighting it.

In the end, it’s love that turns you on.

(Just in case you want to buy the sex-filled book.) Chemistry

2 thoughts on “Cooperation, Unexpected Turn-ons, and One Night Stand.”